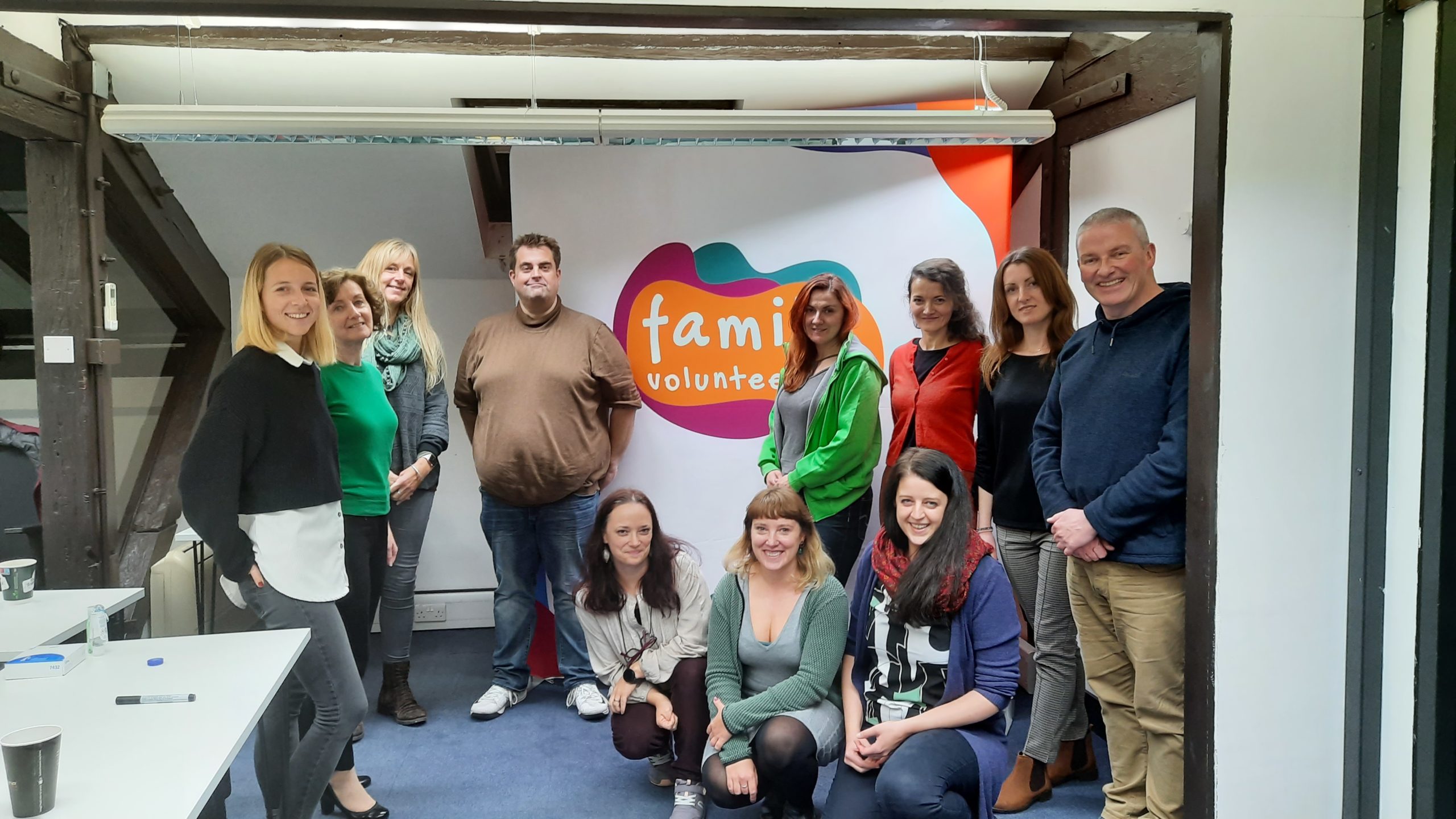 It’s been a long road for all of us since March 2020, but there was a bit of light (and actual sunlight!) in Dublin, Ireland at the beginning of November 2021 when the project partners met up for the first time since the project kick off meeting in Cluj-Napoca, Romania in January 2020.

The meeting ran over two days and was based in the Volunteer Ireland offices in Dublin City. Luckily it was very close to a lovely café, in a park, next to the beautiful St Patricks Cathedral, that served good coffee!

Everyone was pleased to see each other again and some new introductions were also made. The first conversation was around COVID safety, and the second conversation was a game to reacquaint and get to know each other. We discovered that our German partner likes to sleep with a pillow under her arm (which used to be a teddy), a Croatioan partners pet hate is noisy eaters and quite worryingly, an Irish partner does not know any jokes.

Reconnecting with the Family Volunteering project, IOS and Pilots

In order to reconnect to the project, we used the first step of our Impact Tool, and brainstormed about the impact our project has on a systemic level, on organisations, on their staff, and on our learners. What was apparent was that the benefits are far and wide and are also cross cultural throughout.

A stroll around some of the sights of Dublin at lunchtime, (in the sun that was still shining!) included a brief visit to Dublin Castle and its gardens. Here we took in a bronze sculpture commemorating the Special Olympics, held in Ireland in 2003, with the names of 30,000 volunteers who contributed to the games inscribed on plaques. Inspiring!

Back to the office and each partner shared their work to date on the family volunteering projects they had been involved with in their country. These projects included, amongst much more; making bug hotels, cooking at sheltered housing and befriending older people. It was interesting to learn from each other on the positive aspects of the programmes and also the challenges and difficulties that people had overcome. Let’s try to learn from them!

The last item on the agenda (but by no means least) was a visit and presentation from Mary O’Donohue, Executive Director of Making Connections | Connecting the Generations. Making Connections is a volunteer led organisation providing Befriending, Supports and Social Events for older people in Dublin South since 2009. Their work aims to alleviate loneliness and isolation for older people needing support to live independently at home and to stay socially connected. Mary shared with the group how her family volunteers have made such a difference to older people in South Dublin and how the benefits are two ways in so many respects. For example, a mother and daughter volunteer team, spoke highly of the connections they had made. Whilst the teenage daughter kept an older ladys garden in trim order, a skill exchange occurred when the lady in question taught the girl to knit. The project was a great example of the benefits for the community, the recipients and volunteers that a family volunteering project can provide.

Planing next steps and cleaning up beaches

On the second day of the meeting, the morning was spent making plans (as much as you can during a pandemic!) about subsequent partner meetings. It is hoped that these will be in Belgium in March and Norway in May. There was also much discussion surrounding the dissemination event in Brussells and there were many good ideas flying around. Tasks were divided out amongst the partners and the next stages were set!

The meeting finished early in order that the group could catch the DART (urban train) out to Killiney in Co. Dublin. Here we met with Flossie and her mum who run a group called Flossie and The Beach Cleaners. They are a marine environmental charity and are passionate about saving our seas from the ravages of plastic pollution. Through regular fun beach cleaning, school workshops and clean-up events they aim to do what they can to make a difference. The partners were given a hessian sack and a pair of gloves each and directed where to look. Soon, everyone was slowly meandering around the rather grey, windswept beach collecting plastic and any other rubbish they came across. It was in fact a surprisingly meditative, relaxing way to spend an afternoon in the fresh air coming in off the Irish Sea. The benefits were felt clearly by the group and it was easy to picture how families could be involved in such an uplifting project.

Well refreshed, it was back on the DART into the city and we went our separate ways to hotels, homes and airports until we meet again! See you in Brussels!